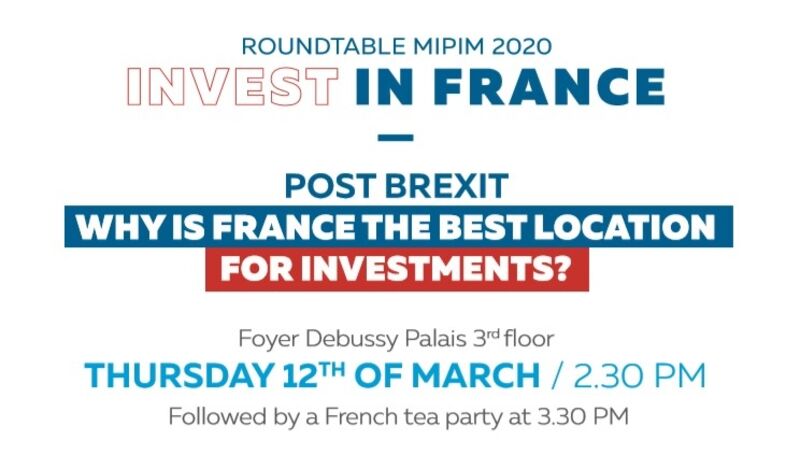 Post Brexit: why is France the best location for investments ?

While foreign direct investments dropped down in Europe, France remains a first-rate territory for international businesses and keeps attracting worldwide investors. During this roundtable in partnership with Business France, six companies will share their successful experience in setting up in:

Interxion is a European leading provider of carrier-neutral colocation datacenter and cloud services. It is the interconnection hub for the world’s leading businesses. HQ in Amsterdam, the company has recently merged with the US group Digital Realty.

In recent years, Marseille has emerged as Europe's fastest growing digital media hub, entering the top ten of the largest Internet hubs in the world – beating Hong Kong and just one place below New York. A direct consequence of the city's strategic position as a gateway between Europe, Africa, the Middle East and Asia.

Over the past five years, Interxion has already invested over 300M€ in Marseille, creating a new 7100m2 datacenter opening in June 2020 in a former WWII submarine base. It will offer the best latencies from Europe to major clients such as the GAFAM and BATX companies.

As Fabrice Coquio, CEO from Interxion France, explained: “Marseille is becoming more and more attractive for new incoming companies which seek to access to greater connectivity for a lower price in Europe”. Marseille demonstrates that the presence of those infrastructures has a positive impact on businesses actions.

The site chosen by Interxion is on the Marseille Port. It’s bordering the largest urban renewal operation in southern Europe called Euromediterranée, the biggest business district to be in Europe with access to the largest bandwidth lowering connectivity costs by 30% for users.

Provence Promotion, the economic attractiveness agency, helps companies and new projects take advantage of both the business district and the connectivity to one of the greater bandwidths in Europe.

Boehringer Ingelheim group is one of the world’s 20 leading pharmaceutical companies. Since it was founded in 1885, the family-owned company has been committed to researching, developing, manufacturing and marketing novel products of high therapeutic value for human and veterinary medicine.

Global Engineering & Capital Investment Projects            With more than 50,000 employees worldwide, the international group offers products to 150 markets and is present in 100 countries.

Lyon has become the centre of excellence for its activities in France, with more than 1,600 employees.

Boehringer Ingelheim Animal Health selected the “ZAC des Gaulnes” located in the heart of eastern Lyon to build an industrial site for the production of active ingredients for veterinary vaccines against Foot-and-Mouth Disease and Sheep Catarrhal Fever. With a total building floor area of 15,000 m², it should be up and running by mid-2022. Thanks to this new site, the production capacity will be multiplied by three. The project represents an investment of more than 200 millions euros leading to the creation of around a hundred jobs in the Lyon BioCenter of Excellence.

The Investment Promotion Agency - ADERLY has worked closely with Boehringer Ingelheim Animal Health during the decision-making process to put forward the assets of Lyon, in competition with 8 territories, internationally located. It helped actively in the site selection with the Métropole de Lyon.

FormFactor is s a leading provider of Semiconductor essential test and measurement technologies along the full IC life cycle.

The Company serves customers through its network of facilities in Asia, Europe, and North America, is headquartered in Livermore (Ca, USA) and counts 1700 employees worldwide, with a 2018 revenue of $530 million.

In 2019, form Factor opened a new service center in Grenoble, the key semiconductor manufacturing & R&D region in France, the leading European countries in term of R&D investment. The reasons for choosing Grenoble were a Central location with access to several high-tech companies in southern Europe, the concentration of many of the companies Form Factor partners who also have facilities in the region., a strong base of engineering talent.  FormFactor plans to grow office and staff locally, and in Grenoble they will find great access to seasoned talent as well as new graduates coming from the local Universities.

On a personal basis M. Tucker chose to be relocated in Grenoble because he “was attracted to the region for the great access to skiing and beautiful mountains, as well as the educational opportunities for his children”.

Symphony is the cloud-based messaging and collaboration platform that connects markets, organizations and individuals, securely. With offices in Palo Alto, New York, Hong Kong, Singapore, Tokyo, Stockholm and London, Symphony decided to establish a new research and development center in the biggest European tech center, Sophia Antipolis in January 2018. “We selected the site following a review of fifteen locations globally ; The opening of the Symphony R&D center in Sophia Antipolis/Cote d’Azur is the result of a strategic decision linked to the density of the innovation ecosystem, entrepreneurship and the dynamism of the French tech. France is a country that trains very talented engineers and knows how to build international champions.” D. Gurlé, CEO, Symphony.

IWG has been present in the Paris Region for 30 years and has, through the expansion of its brands (Regus, Spaces, Signature, HQ and No18), deployed a large network in and around Paris. This would not have been possible without the excellent transport infrastructure of the region and the unique real estate model of France. A breeding ground for trends, Paris is the first city in France to have welcomed an IWG center and to have acted as a « test and learn » area, a ground for innovation and experimentation for the concept of coworking. Over the years, the Group has expanded beyond Paris to its surrounding surburbs, going as far as creating a new brand in 2014, Stop & Work, whose objective is to allow professionals living on the outskirts of Paris to access flexible workspaces close to their homes and throughout the Paris Region.

Founded in 1996 in Amsterdam, Booking.com has grown from a small Dutch startup to one of the world’s leading digital travel companies.

Established since 2011 in Lille with an initial customer service centre of 75 people, the Dutch company has benefited from strong growth and developed its site in Tourcoing until reaching 750 employees in 2019. This intense growth led to the move to a brain new 6,200-square-metre building making it possible to accommodate up to 850 by the end of 2020, and thus become one of the largest of Booking.com's 20 customer service centres in the world and the largest in Europe. Booking.com's employees include account managers, data scientists and sales managers, who respond to individuals and businesses in 26 of the 43 languages in which Booking operates. An adventure that has been made possible by French new labor laws and the ability to easily meet bilingual new talents

Every week, 25 international investors choose France by investing through either a greenfield investment or by investing in equity in a real estate project for instance. Thanks to world-class infrastructures and a deep talent pool, France has been the leading host country for foreign investment in industry for more than 15 years.

Business France is the national agency which supports the international development of the French economy. It is responsible for promoting and facilitating international investments in France, as well as fostering export growth by France-based businesses. Business France is present in France and in 60 countries throughout the world and works with a network of public and private sector partners.

Marie-Cécile Tardieu acted until recently as Secretary General of Choose France Summit 2020. This international summit chaired by President Macron was held last January 20, 2020. It gathered 150+ CEOs of international companies in the Château de Versailles who committed to invest €4billion in France. At the occasion of this panel discussion, Marie-Cécile Tardieu will explain how Business France, along with the whole Team France Invest, can inform, guide and connect international investors who look for investment opportunities in France.

This event will be followed by a high tea party at 3.30 pm.